(in German Fleimstal) is a valley in northern Italy in the autonomous region Trentino-Alto Adige. It is located on the imaginary border between two mountain ranges. From the south surrounds the valley the Fleimstal Alps and from the north massif Latemar in the Dolomites. In the valley flows the river Avisio. 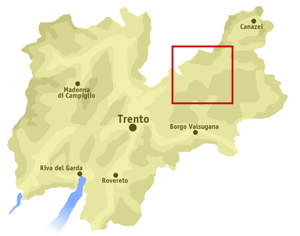 Val di Fiemme is a famous ski resort. There is a number of ski resorts and a network of cross country skiing trails. Between 1991 and 2003 the World Championships in Nordic skiing was there. The World Cup races in cross country skiing regularly take place there. Since 2007 the Val di Fiemme is the venue for final two stages of the race series Tour de Ski. Tour de Ski culminates by the run of red ski slope Olympia III in ski resort Alpe Cermis (2000 metres, Malga Nuova 2229 metres). Cross-country skiers of 3650 metres cover elevation 420 m (i.e. 13% climb), a difficult test is mainly "Deer hiding place" where the inclination of slope in section of 50 metres reaches even 28 °, the finish is 1280 metres above sea level.

In Val di Fiemme and Val di Fassa take place also renowned cross-country long-distance race Marcialonga - 70 km long track leads from Moenydo Canazei, returns to Moena and goes on through Predazzo to Molina, from where it returns to the finish in Cavalese. The race has annually three to four thousands amateur skiers.

Above the town Predazzo is a ski resort where you can ski from the top of Monte Angelo (2357 metres).

Introducing our best accommodation facilities. It is these apartments, hotels and camps, our clients long-term value as a great and happy to come back here.